Author’s Note: Staging a nutty is what someone from South Boston calls losing your &^%#. I may or may not have named one of the squirrels at my feeder George, and I may or may not talk to him when I go to put seed out. No comments on whether or not he answers me. Squirrels do get infested with botfly parasites – if you ever see one rolling in the dirt and acting strangely, it’s probably got botflies and is trying to relieve the itching.  Many thanks to J.E. Hunter for the photo.  Can you hear Steve Buscemi’s whiny voice when you read this or is it just me? 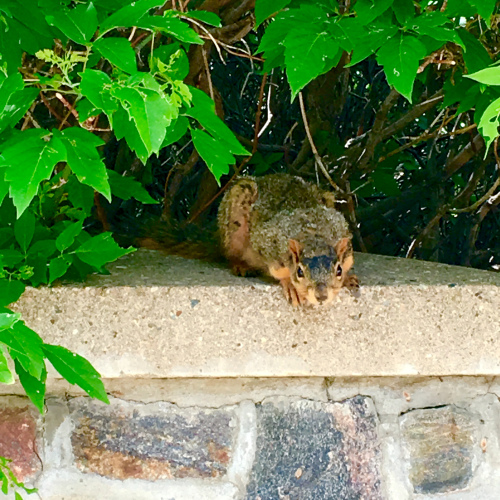 Hey lady, lady, give me your sunflower seeds and nobody gets hurt!

Who’s that? Who’s talking to me?

Look down. On the wall.

A talking squirrel? Now I know I’ve lost it.

No lady, you haven’t. I’m a squirrel. I talk. I need sunflower seeds! Now! Please lady, you gotta help me.

You sound like a junkie. Hey…wait a sec, George? Is that you?

Come on, I leave enough sunflower seeds at the feeder to feed an army. How can you and Gracie and Jack* eat that much?

Hey we’re squirrels. We have a high metabolism.

High metabolism?!?! If I had the metabolism you have I’d weigh 10 pounds. Slow your roll a bit, man.

We’re squirrels! We eat, we run out in the road to mess with humans, and we make baby squirrels. That takes a lotta energy.

Well vary your diet a little bit. I leave corn and other stuff…and don’t you like peanuts?

Yeah but that crazy Billy** grabs ’em before I even know he’s there! He’s a jay – you know he steals them and half the time doesn’t even remember where he put them.

My baby boy has botflies and Gracie can’t leave the nest to forage. It’s up to me and the feeder is empty.

Ok. Well….I was on my way to the store. I’ll pick up a bag of sunflower seeds while I’m there.

Could you get the black oil seeds?

What do you think the feeder is, a five star restaurant?

Ok, fine. Black oil sunflower seeds. But if I catch you swinging upside down from the feeder tomorrow, I’ll sic Quinlan on you. Don’t push your luck.

The Irish Greyhound who lives upstairs. I’ve heard he likes squirrels, if you catch my drift.

Ok, ok! No swinging! I promise.

*Gracie and Jack are named after Gracie Allen and Jack Benny. George is of course named for George Burns by way of Star Trek IV, which I was watching when I named George and Gracie. My husband named Jack.

** Billy is my bluejay, so named because I’m just so original!

2 thoughts on “Staging A Nutty”

Leave a Reply to elfidd / The Rooster Cancel reply